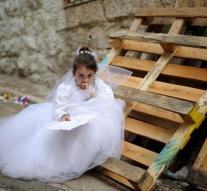 ankara - The controversial Turkish law for underage marriages is withdrawn provisionally. The proposal of the government party AKP was the perpetrator of sexual abuse of a minor in some cases may not be prosecuted if he marries his victim. The abuse should be done without coercion and violence, and applied only to cases before November 16 of this year.

The bill would be voted on Tuesday in parliament. The opposition and several human rights organizations were strongly opposed the law because perpetrators of rape of a minor can easily escape punishment. Turkish Prime Minister Binali Yildirim said that a committee will consider a new proposal.

In Turkey, thousands of men are in jail because they got married to a girl under the age of eighteen and children through an Islamic ceremony. It is seen as sexual abuse. According to Yildirim had proposed should provide a solution here, because the children from these marriages now grow up without a father.