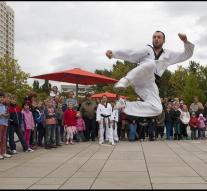 - Eleven Turkish karatekas have asked for political asylum in Germany. That happened after they were stopped at Düsseldorf airport.

The eleven were among a group of fourteen Turks who claimed that they were en route to a karate tournament in the German city. After investigation the police concluded that this was not true and the suspicion arose that a smuggler was among the karatekas.

Then two members of the group chose to travel back to Turkey. An alleged smuggler was arrested after asking the other eleven asylum. Whether they get that is not known.