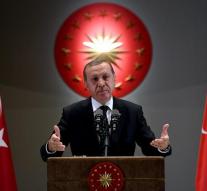 ankara - The highest Turkish courts go on the shovel. The reorganization will give Minister Recep Tayyip Erdogan, the opportunity to his liking judges sacking and strengthen his grip on the judiciary, opponents complain.

The Turkish parliament gave its blessing reorganization. Which according to Erdogan's AK Party, which has a majority in the parliament, designed to facilitate the judicial process. But the opposition strongly opposes the measure. The CHP, the main opposition party in Turkey, announced to go to the Constitutional Court.

The bulk of the 711 judges of two of the highest courts of the country, the State Council and the Supreme Court of Appeals, will resign. The High Council of Judges and Prosecutors, which falls under the Ministry of Justice decides on retraining and new appointments.