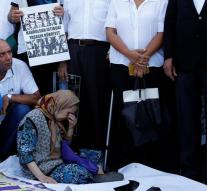 There are several proceedings against Dündar, o. A., Because he published secret weapon supplies by the Turkish secret service to militias in Syria on the Cumhuriyet website. According to Erdogan, it was about deliveries to Turkmen and if it were to remain a state secret, according to others, the weapons were meant for jihadists. The Fethullah Gülen movement was aware of the deliveries and had filmed the trucks by infiltrated police officers, filming everything and communicating the material through a politician to Cumhuriyet.

The Gülen movement is suspected of the failed coup last year on 15 July. Due to the publication of the images, Dündar is considered as a hanger of the movement. Dündar, however, claims that he is not a spy but a journalist and that the Turkish people have the right to know the weapons supplies.

Another accusation against Dündar is that he participated in solidarity actions for the forbidden Kurdish newspaper Özgür Gündem, affiliated with the PKK. This terrorist organization has recently killed a 22-year-old teacher, a 23-year-old teacher and two politicians. Özgür Gündem has been closed and journalists are caught because they would support the PKK.

Among the journalists accused of ties with terrorist organizations is also Ahmet Sik. Yet, they have always criticized the power of the Gülen movement. He also wrote about the strong band that originally existed between this Islamic movement and the AKP of Erdogan. Here, Erdogan is no longer reminded.