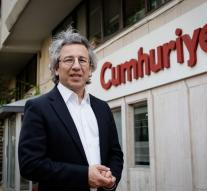 ankara - Two prominent Turkish journalists on Thursday arrested for assisting terrorists. The arrests follow publications of photos in the newspaper Cumhuriyet that would show that the Turkish intelligence service beginning in 2014 has been instrumental in arming jihadists in Syria. The service would have sent weapons to extremists.

The editor Can Dündar, the man of this newspaper in the capital Ankara, Gül Erdem, have been arrested. The case against them has been dragging on for some time. They would rather be accused of membership of a terrorist organization and a breach of national security.