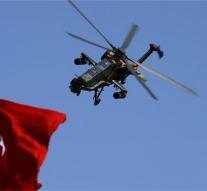 The cause of the crash is unknown. Rescue teams are on the way. The helicopter was en route to a military post in the region to celebrate the end of Ramadan.