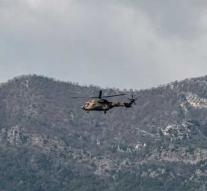 istanbul - A Turkish army helicopter was shot down in the southeastern Hatay province during actions against Kurdish militias in nearby Syria. The Hürriyet newspaper reported that President Erdogan said in an application on Saturday that unfortunately such incidents occur in a war and that the perpetrators will pay a high price.

The Turkish army invaded the northwest of Syria on 20 January to expel Kurdish fighters. The Kurdish militia YPG (People's Protection Units) are, in the eyes of the Turkish government, an extension of the terrorist PKK. Turkey wants to switch off the YPG first in the Afrin area, near the border with Hatay province, and Manbij on the right bank of the Euphrates river.

According to the Turkish army, more than 1140 Kurdish fighters have since been eliminated. In the night from Friday to Saturday alone, according to the army, 36 targets of the YPG were attacked and 79 fighters were eliminated. The armed forces do not indicate what disabling means, but that must be killed or imprisoned.