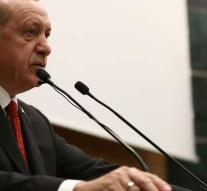 ankara - Once again, two representatives of the pro-Kurdish opposition party HDP lost their seat in the Turkish parliament. Ibrahim Ayhan, representing the province of Sanliurfa, and Deputy Group Chairman Ahmet Yildirim lost according to state news agency Anadolu their mandate under terrorist propaganda and insulting a head of state. HDP confirmed the message.

Yildirim, who resides abroad, has been found guilty of insulting President Recep Tayyip Erdogan, Ayhan, according to the judge, made terrorist propaganda. So far, nine HDP parliamentarians have already been sidelined. The second largest opposition party now has fifty members left in the national assembly. The HDP finds the decision in violation of the law. Political leader Filiz Kerestecioglu spoke of contempt for the will of the people.

Erdogan sees the left HDP as an extension of the banned Kurdish workers' party PKK. Several HDP politicians are in pre-trial detention on suspicion of terrorist acts, including the former leaders Selahattin Demirtas and Figen Yüksekdag.