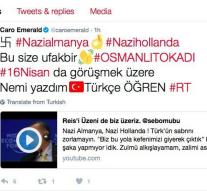 berlin - Presumably Turkish hackers have access to thousands of Twitter accounts Wednesday provided and there on anti-German and Dutch texts. The messages were the hashtags #Nazialmanya und #Nazihollanda, images of swastikas and include the words 'April 16 we see each other.'

held the referendum in Turkey on April 16 on changing the constitution which President Erdogan gets more power. Among the affected Twitter accounts were those of Amnesty International, the German soccer club Borussia Dortmund, the municipality of Amstelveen and the Dutch singer Caro Emerald.

Of the hacked accounts were at least 25 international organizations. The getwitterde shopping was a video that starts with a portion of a speech by Turkish President Erdogan. 'If we die, let us die like men,' said the head of state there.