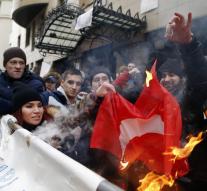 moscow - Protesters in Moscow, the Turkish embassy pelted with stones, eggs and paint bombs. Hundreds of people had gathered outside the building to express their dissatisfaction with the shooting down of a Russian fighter in the Turkish- Syrian border by Turkish F16s.