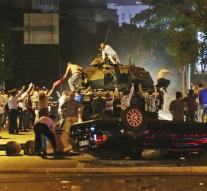 - At least three Turkish diplomats since the failed coup attempt in Turkey in July asked for asylum in Germany. According to German media, the military attaché of the embassy in Berlin one of them. The message may relations between Germany and Turkey, which are already under pressure, deteriorate further.

After the failed coup began Erdogan of Turkey with a big clean-up aimed at supporters of the cleric Gülen. According to Erdogan, was behind the coup attempt. Erdogan left picking up thousands of suspected supporters and / or dismiss. He also declared invalid hundreds of diplomatic passports.

In Germany, therefore eight diplomats affected. Three of them have reportedly sought asylum in Germany.