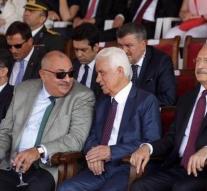 apeldoorn - Turkish Deputy Prime Minister Tugrul Türkes was present in The Netherlands next week on Tuesday in a memorial of the failed coup in Turkey a year ago. Türkes is a guest of a memorial of the Union of European Turkish Democrats (UETD) announcing the event taking place on July 11 in the Orpheus conference center in Apeldoorn on the Facebook page.

In March of this year, the intended arrival of two Turkish ministers who wanted to campaign in the Netherlands for the Turkish referendum became a diplomatic relay. Minister of Foreign Affairs Cavosoglu was not allowed to land in the Netherlands and minster of Family Affairs Kaya was sent from Rotterdam and escorted to Germany.

According to the UETD, the meeting on July 11th was a memorial of the failed coup attempt on July 15 last year, dismissed by President Recep Tayyip Erdogan's supporter.