Home / World / Turkish delegation to USA because of conflict 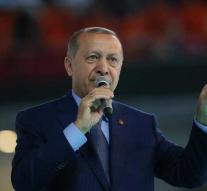 ankara - A Turkish government delegation will travel to the United States within two days to try to solve the problems between the two countries. CNN Türk reports this on the basis of diplomatic sources. According to CNN Türk, the United States and Turkey have already agreed conditions for the meeting on certain points.

The foreign ministers from both countries also spoke to each other on Friday in Singapore. The American government called that 'a constructive conversation. 'But a day later, Turkish president Recep Tayyip Erdogan announced that any US ministers' funds in Turkey are frozen.

That was a countermeasure, because the US imposed sanctions on two Turkish ministers because of the imprisonment of the American preacher Andrew Brunson in Turkey. Brunson is suspected of terrorist activities, but according to the US there is no evidence for this.