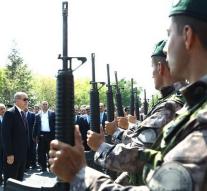 ankara - All officers in the Turkish army come under the Minister of Defence and closed military academies. That the Turkish President Recep Tayyip Erdogan announced Saturday.

The academies to close the doors to be replaced by a university of national defense, said the president.

Erdogan also announced a reduction in the Turkish gendarmerie on. However, the paramilitary police force gets more sophisticated weaponry to carry out its tasks.