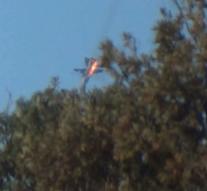 ankara - Parts of the Russian fighter jet shot down Tuesday by Turkish F16s, have landed on Turkish territory and have wounded two Turkish citizens. That the Turkish President Recep Tayyip Erdogan said Wednesday.

According to Erdogan flew the SU- 24 in Turkish airspace when it was hit. The aircraft came down in Syria. The president stressed that his country has no intention to escalate the incident. We only defend our own security and " rights of our brothers " in Syria, says Erdogan.