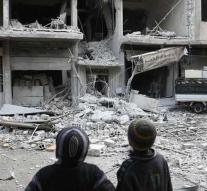 ankara - The Turkish forces have attacked Kurdish-Syrian militias in Syria. The target is Afrin and surroundings that are in the hands of Syrian-Kurdish militias who call themselves Public Protection Units (YPG).

The Turkish Minister of Defense, Nurettin Canikli, said it is an attack against terrorists. According to him, the attack actually started Friday with shelling. The YPG have announced that they will defend Afrin. The YPG have US support in the fight against jihadists.