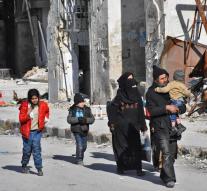 damascus - The Turkish army has inhabitants of the Syrian site Al-Bab pamphlets warned to seek refuge. This suggests that an attack on the city of possible imminent.

Turkey-backed rebels have recently been increasingly pushed forward towards al-Bab, which is held by the terrorist group Islamic State. Rebels seized last week at least two villages located in the town west.

Through pamphlets, presumably from airplanes were thrown, the Turkish army urges residents of al-Bab on not cooperating with IS. 'Help us and bring your loved ones as soon as possible in security until we purify your country of these traitors,' he said.