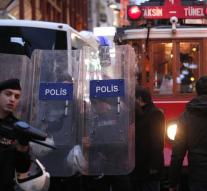 - Turkish security forces have slain during three days of fighting 54 militants of the outlawed Kurdish Workers Party PKK. The fighting took place in the towns of Silopi and Cizre in southeast Turkey, according to the state news agency Anadolu Friday.

In the two towns near the Syrian-Iraqi border in the province of Sirnak, was Monday set a curfew. Tuesday, the Turkish army began a major offensive against the PKK. In several regions, has now been extended a curfew, schools remain closed. Prime Minister Ahmet Davutoglu has sworn to continue until all fires,, terror 'have been cleared.