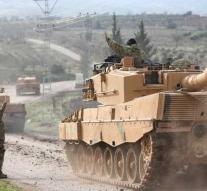 The country wants to create a 'safe zone' of 30 kilometers in Afrin, according to Yildirim. The Turkish army confirms that it has entered the neighboring country and that no soldiers have been injured so far.

The military intervention comes a day after Turkey started air strikes on Syrian-Kurdish militias in northern Syria. They deny that Turkey has invaded their territory. According to them, the advance of the Turkish army after fierce fighting failed and had to withdraw.

The Syrian-Kurdish militias, who call themselves Public Protection Units (YPG), are allies of the US. Ankara sees the YPG as an extension of the terrorist PKK (Kurdistan Workers' Party) and wants to prevent an independent Kurdish state from the wars in Syria and Iraq.

Turkey started on Saturday with the offensive against the YPG. According to the Turkish army, 153 targets of the militants were affected in the air strikes. Nine people were killed. On the ground, Turkey is supported by the rebels of the Free Syrian Army.

Also on Sunday, the Turkish army carried artillery attacks on the YPG. 'Also on the second day Operation Olive Branch continues to provide peace and security for our people, protect the territorial integrity of Syria and eliminate all terrorist elements in the region,' said Turkish President Tayyip Erdogan's spokesman on Twitter.

Earlier in the day four missiles were fired from Syria at the Turkish border town of Kilis. According to the Turkish state press agency Anadolu three missiles hit two houses, a fourth projectile landed on a piece of undeveloped land in the center of the city. According to Anadolu, no casualties have occurred.