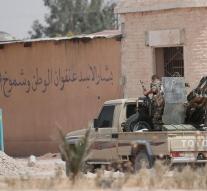 - The Turkish military said Tuesday theses of terrorist group Islamic State in Syria fired after two mortar shells from Syria were smashed in the border town Karkamış. NTV television station reported on the authority of military sources that forty artillery shells were fired at four different targets in IS area.

The two shell holes in Karkamış caused no injuries. They were, according to the Turkish news agency Anadolu apparently fired during fighting between IS fighters and Syrian rebels.

Karkamış is close to the Syrian city Jarablus. Turkey-backed rebels there prepare an offensive against IS. That they would fight Kurdish groups who want to be a battle against IS fighting for.