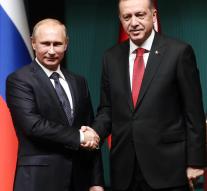 moscow - Russia, the Ambassador of Turkey in Moscow summoned to protest in strong terms against the downing of a Russian fighter jet. This was reported by the Russian news agency Tass.

According to the Russians, the plane was without any warning by the Turks from the sky shot while flying over Syria. Turkey says the jet violated Turkish airspace and certainly warned ten times.