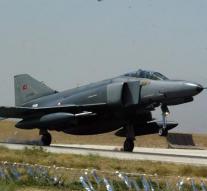 When the attacks were more PKK members were slain, but numbers are not mentioned. Also, a local leader of the Kurdish movement would have died.

The Turkish army clashed frequently in recent days with the PKK. Thus arrived Saturday in clashes in the province of Hakkari five Turkish soldiers were killed. Turkish security forces reported in the night from Friday to Saturday although eight deaths on the Turkish side and eleven on Kurdish side in Van province.

Gesink splendid victory in the picture