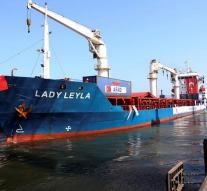 - A Turkish ship carrying aid for Palestinians in the Gaza Strip on Sunday arrived in the Israeli port Ashdod. It is the first auxiliary transport since Israel and Turkey Tuesday signed a verzoekingsakkoord after six years of icy coolness.

The countries got into a fight after the assault by Israeli commandos on the Mavi Marmara ship which was en route with supplies to Gaza. Therefore came ten Turks killed.

The ship moored in Israel Sunday, the Lady Leyla has eleven tons of food, clothes and toys on board. The reconciliation agreement does not include the blockade of Gaza but Turkish aid to the enclave is allowed.