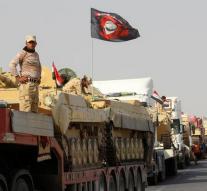 - Military units trained by Turkey in Bashiqa in northern Iraq, will help in the attack on Mosul. This was announced by the Turkish state news agency Anadolu Friday. The operation aims to expel Islamic State from the major Iraqi city.

Anadolu has government officials who were involved in the talks between Turkey and the United States understood that the offensive ' if there are no unforeseen developments' within days. Iraqi sources confirmed. In the region northeast of Mosul performed the peshmerga, Iraqi Kurdish militia, backed by Western allies successfully fight against IS.