Home / World / Turkey will not talk to MEP 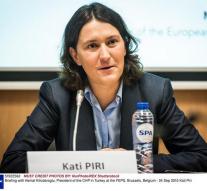 brussels - Turkey refuses to engage with PvdA Kati Piri, Turkey rapporteur of the European Parliament on the state of arrested Kurdish parliamentarians. A planned trip to Turkey is therefore canceled, announces its spokesman.

Piri would go Thursday in talks with the Turkish government, along with Elmar Brok, chairman of the Foreign Affairs Committee of the European Parliament. Parliament President Martin Schulz, however, learned that Turkey here does not need, after he canceled the trip.

Turkey issued by the spokesman no motivation for the refusal. However, it is likely that that has to do with the decision of Piri that the EU should freeze the accession negotiations with Turkey. She said last week in response to a highly critical European Commission report on the 'decline' of Turkey in the field of law and human rights.