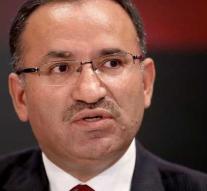 ankara - Turkey has warned the United States about the support they give to Kurdish YPG militias. 'If they want to prevent a possible clash with Turkey, they should stop supporting terrorists,' said Turkish Deputy Prime Minister Bekir Bozdag on Thursday.

The Turkish army has started an offensive in the Syrian Afrin region by the Kurds of the YPG. 'Those who support the terrorist organization will become a target in the fight,' Bozdag told the broadcaster A Haber.

US President Donald Trump had previously voiced his concern about Turkey's military operation in Afrin in a telephone conversation with his Turkish counterpart Recep Tayyip Erdogan.