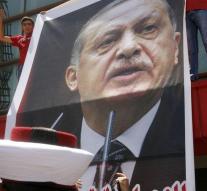 - After the failed coup attempt in Turkey will vote to introduce the death penalty again. Prime Minister Binali Yildirim said it is envisaged to modify the constitution. So must avoid another coup committed.

Yildirim said the perpetrators of the failed coup worse than the PKK, the Kurdish independence movement. The coup plotters according to Yildirim fired on civilians. He called July 15 a holiday for democracy.

Earlier, Erdogan pointed emphatically to all supporters of the influential cleric Fethullah Gulen. He would sit by the government after the coup.