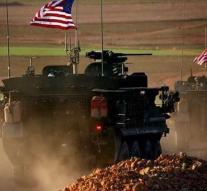 istanbul - Turkey has proposed to the United States that the troops of both countries be stationed together in the Syrian area of ​​Manbij. The Kurdish YPG fighters must then retreat to the east of the Euphrates River. That is what a Turkish official said.

The proposal has been submitted to US Secretary of State Tillerson, who is visiting the Turkish capital Ankara for two days. That visit seemed a bit uncomfortable before, because Turkey thinks that America supports the Syrian-Kurdish YPG, while Turkey regards it as terrorists. In recent weeks there have been quite a few anti-American sentiments from Turkey around the world.

However, Tillerson and President Erdogan have had an 'open and productive' talk to strengthen ties, said a spokesman for the US Department of State.