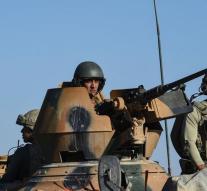 ankara - Turkey hopes for a cease-fire in Syria for the new year. That Foreign Minister Mevlüt Cavasoglu said Thursday.

Turkey said Wednesday that it along with Russia has drawn up an agreement for a ceasefire in Syria. What it meant exactly agree, however, remained vague. In an interview with the station AHaber Cavasoglu said that Turkey and Russia would guarantee the file.

The minister also said that Turkey is not going to talk to Syrian President Bashar al-Assad. Turkey supports groups that rebelled against Assad and said earlier that the Syrian leader had to leave.

Cavasoglu said that Turkey joining forces with Russia against the terrorist group Islamic State in the Syrian town of al-Bab. Turkey, the United States asked for air support, but according Cavasoglu the US does not give under the pressure of the Syrian Kurdish YPG militia.