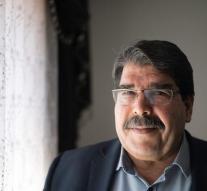 ankara - The Turkish authorities have issued an arrest warrant for the leader of the Syrian Kurdish Democratic Union Party (PYD). According to the state news agency Anadolu Salih Muslim is linked to a bomb attack on some Turkish army vehicles in February in Ankara. The bombing came 29 people died and dozens were injured.

The PYD is the political arm of the Syrian Kurdish YPG militia, backed by the United States in the fight against Islamic State in Syria. Turkey considers the PYD as an extension of the outlawed Kurdistan Workers' Party PKK.

In the arrest papers listed 47 more other persons according to Anadolu. Among them are some leaders of the PKK. This group by Turkey, the United States and the European Union as a terrorist organization.