Home / World / Turkey: US Envoy IS can leave 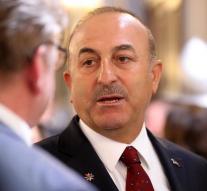 istanbul - If it lies with the Turkish Foreign Minister, then the US Envoy can leave for the fight against Islamic State. According to Mevlüt Çavusoglu, Brett McGurk supports Kurdish militants. This was announced by the minister on Thursday after his visit to Turkish President Recep Tayyip Erdogan to US President Donald Trump.

Ankara considers the Kurdish YPG militia, an American ally in the fight against IS, as an extension of the prohibited PKK movement. 'Brett McGurk supports both groups anyway,' judged Çavusoglu. 'Therefore it is desirable that he be replaced. '

The German troops can also leave, but from the Turkish airport, Incirlik, where they camped in support of the fight against IS. 'If they want to go away, they're free to go,' said the Turkish minister. 'We are not going to be cheated. 'The German government is considering removing its soldiers after a new Turkish refusal to allow visits from parliamentarians to military personnel.