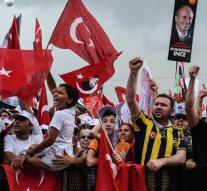 ankara - Approximately 56 million Turks can choose a president and a parliament between 7 am and 4 pm (Dutch time). The popular leader Erdogan, who has been distributing the sheets for 15 years, wants a mandate to stay in power for years to come. He has introduced a new presidential system that pushes the parliament to the background. That is in fact already so because of the state of emergency that has been in force since the bloody coup attempt in 2016.

The opposition led by the charismatic Muharrem Ince hopes that the repression, the economic downturn and the problems with millions of refugees will extinguish the star of Erdogan. The press is muzzled and tens of thousands are firmly accused of involvement in the coup or in terrorism, including the left pro-Kurdish presidential candidate Selahattin Demirtas. The opposition to Erdogan, for the time being, is hopeless, given its absence in the traditional media.

Nevertheless, the elections are exciting, because it gradually becomes clear that Erdogan's image as a reformer and folk hero suffers from the problems the country is facing and an 'Erdogan fatigue' seems to arise.

The big question is whether Erdogan is elected president at once. If he does not succeed, there will be a second round on 8 July. Then he is most likely to face Muharrem Ince of the CHP (Republican People's Party). A possible second round would be a painful defeat for Erdogan. It would be even more painful if his party for Justice and Development (AK) lost the majority in parliament. The results come in the evening and night.