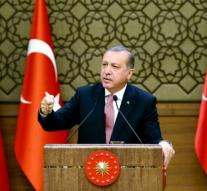 Erdogan complained that the EU has left him in the lurch after the failed coup attempt in his country on July 15. Even louder he complains that the visa-free travel for Turks is still not a fact. If not soon, then the refugee deal table, Erdogan threatened now.

The fierce rhetoric of Erdogan seems mainly for domestic use. Because despite all the criticism Turkey, the EU, by far its largest trading partner needed. Meanwhile, the Turkish shenanigans are in Brussels viewed with suspicion.


'We need to completely ignore that man. This is muscle language, which he wants to show that he is the strong man, 'said VVD MEP Hans van Baalen.

Brussels must be the Turks' not out of the tent lure 'he says. 'The coup was immediately condemned so what is he talking about?' Said the liberal. If Erdogan does not adhere to the deal, the EU should punish him with trade restrictions, he says.