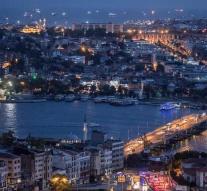 istanbul - The Turkish authorities have arrested 417 people in an investigation into a large money laundering operation. Together, the group would have transferred over 360 million euros to thousands of accounts abroad.

The receivers would be Iranians in the United States. The suspects received a commission for sending the money.