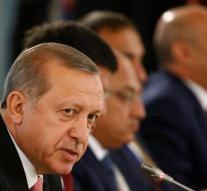 ankara - Turkey goes suspend another 1,500 judges and prosecutors because of alleged links with the spiritual Fethullah Gulen. The Turkish newspaper Hurriyet reported on Wednesday that the Supreme Council of Judges and Prosecutors, a second wave of suspensions is preparing.

Previously already suspended about three thousand judges and prosecutors, because they have ties to Gülen. Turkey says that Gülen is the mastermind behind the failed coup of 15th and 16th July. He has lived in exile in the United States. Gülen denies that he was involved in the coup attempt.

Turkey has more than 16 000 people arrested on suspicion of involvement in the failed coup.