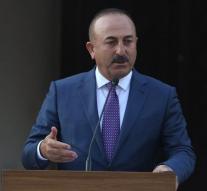 bled - Turkish Foreign Minister Mevlüt Cavusoglu Tuesday hinted at halting the accession negotiations with the European Union. The Turkish government is under tremendous pressure,, '' to stop the concert, because the Turkish population is appalled by the,, double standards' which pulls the EU across the country since the coup attempt in July.

The Turkish minister spoke at a regional security meeting in Bled in Slovenia. He accused the EU them to criticize others, but not critical to many. The Turks are very disappointed that expressions of support or look after the failure of the coup have been made, he said.