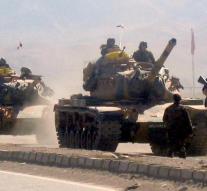 ankara - Turkey has at least nine extra tanks sent to northern Syria, an operation aimed at expelling forces of Islamic State (IS) from the northern Syrian city Jarablus. The reported eyewitnesses.

The operation must also prevent the capture of Kurdish militias area. A Turkish government official reported that there are more than twenty Turkish tanks on the territory of Syria are active and if necessary additional military and other equipment is used.

,, We use construction vehicles to reopen roads and we have the next few days may need more of, 'said the Turkish official.,, And we also use armored vehicles when needed. '


The deployment is part of the operation by Turkey-backed rebels of the Free Syrian Army (FSA), which Wednesday Jarablus recaptured. They were aided by Turkish tanks and commandos and Turkish and US warplanes.