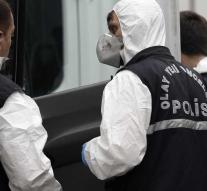 istanbul - With a one-day delay, the Turkish authorities have now also searched the home of Saudi consul in Istanbul in the hope of finding traces of the missing journalist Jamal Khashoggi. The state press agency Anadolu reported that a detective team entered the building on Wednesday.

Initially, there was confusion about this police action. Minister of Foreign Affairs Mevlüt Çavusoglu denied media reports Wednesday that the consul's house was searched. Because his family was still present, the inspectors had to postpone their work. The consul himself had already flown to Riyadh Tuesday. Turkey did not send him back to Saudi Arabia, emphasized Çavusoglu.