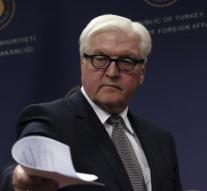 ankara - The European Union is 'condescending' in the negotiations with Turkey on accession to the union. That said, the Turkish Foreign Minister Mevlut Cavusoglu Tuesday after meeting with his German counterpart Frank-Walter Steinmeier. The European Commission said last week that Turkey has since the failed coup in July 'removed' from Europe.

Prime Minister Binali Yildrim said Tuesday the parliament that Europe has to choose between Turkey and the enemies of his country.

EU Member States were divided Monday on the continuation of talks on Turkey's accession. One end of these negotiations will bring the so-called refugees deal with Turkey at risk. Ankara also imposes itself a bomb under the process, by speculating about the reintroduction of capital punishment.