Home / World / Turkey: relations with the US on a critical point 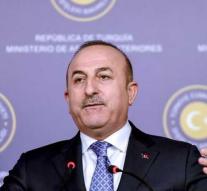 istanbul - According to the Turkish Foreign Minister, relations between Ankara and Washington have reached a 'very critical point'. 'Or we improve the relationships or our relationships are completely disrupted. There is no alternative, 'Mevlüt Cavusoglu said in Istanbul Monday.

Cavusoglu said that the different positions in the Syrian civil war are the main cause of the tense contacts with Washington. He wants to talk about this during the visit of the US Secretary of State Rex Tillerson to Ankara this week.

The US are connected with the Kurdish YPG fighters in the fight against militias of Islamic State. Turkey sees the YPG as a terrorist organization because of their close links with the banned Kurdistan Workers' Party PKK.

Since January 20, the Turkish army is conducting a military operation against the YPG in northwestern Syria. Turkey wants to extend the offensive to Manbij, also controlled by the Kurds. There, however, the United States stationed its own troops.