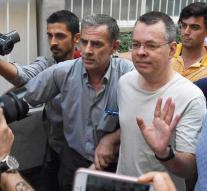 ankara - A Turkish court refused to withdraw the house arrest of the American preacher Andrew Brunson. The request is now submitted to a higher court, the Hürriyet newspaper reports.

The prosecution of Brunson is a major problem in the relationship between Turkey and the United States, two NATO allies. The US imposed sanctions on two Turkish ministers because of the preacher's imprisonment. Meanwhile, the countries are also harassing each other with trade measures.

The Turkish authorities accuse the clergy of supporting a terrorist organization. Brunson was placed under house arrest last month after spending a year and a half in detention. The US finds this insufficient and demands that it be released.