Home / World / Turkey: rebels slain in battle with IS 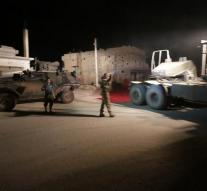 - Fighting in Syria between Turkey-backed rebels and terrorist organization Islamic State have taken over the past 24 hours fifteen rebels life. This was announced by the Turkish army on Monday.

Some rebel groups, currently in battles with IS are engaged in the towns of Azaz and al-Rai, supported by Turkish elite units and the Turkish Air Force. The fighting raged Monday forth.

The coalition led by the Verenige States IS combats, also claimed back air strikes. This covered thirteen IS fighters killed.