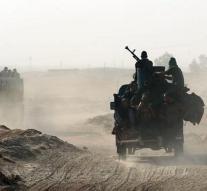 ankara - Turkey is ready to take measures ' '' in Iraq since the United States and Iraq promises about keeping away from Kurdish and Shia fighters have not been fulfilled. With that warning, the Turkish Prime Minister Binali Yildirim Saturday.

Turkey does not want the Kurds and Shiite militias backed by Iran join the battle for Mosul, IS the largest Iraqi stronghold of terrorist movement. According to Yildirim, Turkey can not afford to do anything themselves, since it shares a 350 kilometer border with Iraq. ' We have taken all possible preparations because the promises made by the US and Iraq on the PKK and Shiite militias have not been sufficient, '' says Yildirim.

' Turkey can not sit still and take place along the border battles and massacres, and possibly get underway refugees. It will act as the need arises, '' said the prime minister.