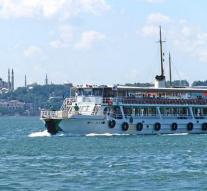 - Turkey is ready to absorb the tens of thousands of people who will be expected to flee from the Iraqi city of Mosul. That said, the Turkish Deputy Prime Minister Numan Kurtulmus Monday.

Kurtulmus said not to expect a massive flow of refugees, provided the operation 'correct' is performed. UN refugee agency UNHCR is less optimistic and called on donor countries with 61 million dollars to cross the bridge for the reception of refugees from Mosul.

'UNHCR is concerned that the events in Mosul possible 100. 000 Iraqis fleeing will do save towards Syria and Turkey,' UNHCR said in a statement. With the money the UN agency plans to set up more tents. With winter just around the corner should also items to be purchased to protect people from the cold.

The Iraqi army began on the night of Sunday to Monday on the offensive to retake Mosul on terror movement Islamic State. Iraq is supported by among others the United States, but also working with Shiite militias and the Kurdish peshmerga.

Turkey does not directly participate in the battle for Mosul, but it has a military contingent in northern Iraq to train fighters. The presence of the Turkish military is a thorny issue. Iraq demands that Turkey withdraws, but Ankara not worrying about it.