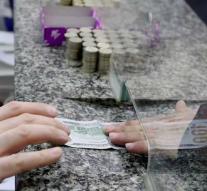 ankara - The Turkish central bank has again substantially strengthened its main interest rate in an effort to stop the free fall of the lira. It is already the third rate hike in two months. At the bank, everything is currently being done to prevent major economic problems in Turkey as far as possible.

The main interest rate rises by 1.25 percentage points to 17.75 percent. The value of the lira has recently dropped considerably, with the result that the already hefty inflation in the country threatens to rise even further, and life for people in the country is becoming increasingly expensive.

At the end of last month the central bank also held a special emergency council. It was decided to raise interest rates by 3 percentage points. However, that strong interest rate turned out to be insufficient.

In the financial world there is great doubt about the increasing influence of President Recep Tayyip Erdogan on monetary policy in the country. Many connoisseurs are still not convinced that the central bank will succeed in halting the strong inflation in Turkey. The price of the lira rose nearly 2 percent shortly after the interest rate decision.