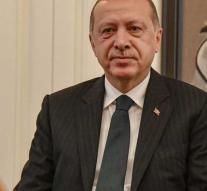 ankara - Turkey will do everything in its power to clarify the 'shameful murder' of the Saudi journalist Jamal Khashoggi. That's what President Recep Tayyip Erdogan's spokesman said to reporters Monday. After a cabinet meeting, he once again said that the Turkish authorities concerned had set themselves the goal of getting all the details in this case to the table.

Khashoggi is missing since October 2, when he entered the Saudi consulate in Istanbul. After weeks of denial knowing something about his fate, Saudi officials have admitted that the critical journalist has been the victim of an 'operation that is not good. '

Ankara demands of them that the whole truth about the death of Khashoggi comes to light and will not rest until it is ready. Erdogan already promised that he would come with a detailed statement about the circumstances during a meeting of his AK party on Tuesday.