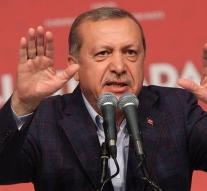 - Datingshows have not been featured on Turkish television since Saturday because they are prohibited. According to Deputy Prime Minister Numan Kurtulmus, the dating programs are in violation of the tradition and religion in Turkey. They would also endanger the holiness of the family.

For months, Turkey has been discussing dating programs that generate a lot of ad revenue. For example, various petitions have called for a ban on the programs. Thus, on Saturday they were banned in the current form on radio and television.

According to a member of the AKP party, of which President Recep Tayyip Erdogan is the co-founder, the dating shows receive thousands of complaints a year. The dating shows may be broadcast on television if they constantly show a warning.

The measure seems to rely on critics on the consequences of the referendum, which gives Turkish President Erdogan more power. The critics fear that Turkey is becoming increasingly conservative. On Saturday, the Turkish authorities also blocked access to the online encyclopedia Wikipedia.