Home / World / Turkey picks up dozens of IS suspects 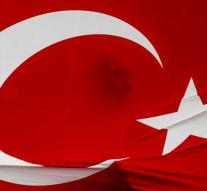 istanbul - In actions against terrorism, Turkey has arrested 82 people who are members of the Islamic State (IS) terror group. Turkish state media report that 77 suspects are foreigners.

The suspects have been arrested in at least sixteen places in Istanbul. Safety officers confiscated documents from IS during the actions. The Turkish authorities suspect that the suspects were active for IS in conflict zones in Iraq and Syria and were preparing attacks in Turkish cities. Turkey wants to extradite foreign IS suspects to the country where they come from. The authorities did not make any statements about the nationality of the arrested suspects.

The government in Ankara holds IS responsible for a series of attacks in the country since 2015. In recent months, Turkey has carried out several actions against potential members of the terrorist network.