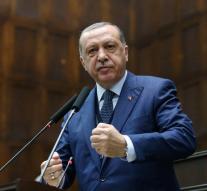 ankara - The Turkish authorities have ordered the arrest of 189 lawyers. According to state press office Anadolu, lawyers are suspected of tensions with the movement of Islamic spiritual Fethullah Gülen, who considers the Turkish government to be the brain behind the failed coup last year.

The anti-terrorist police were searching for eight suspects in eight provinces, of which 78 have been arrested. Some of the lawyers would use the Bylock smartphone app. According to the government, the Gülen network uses that program to send encrypted messages.

It is not the first time that lawyers are associated with the so-called Gülen network. The government announced last month that more than 4000 judges and prosecutors have been out of office since the coup attempt. Gülen has always denied that he was involved in the failed coup.