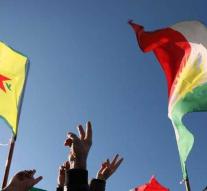 ankara - Turkey has so far neutralized 1780 warriors of the Kurdish YPG with its operation Olijftak in northwest Syria. 'The Turkish General Staff reported this.

According to Turkish media, this means that the YPG militias surrendered or were killed. The Turkish army started the offensive in the Afrin region together with the Free Syrian Army (FSA) on 20 January.

Ankara wants to prevent the Kurds in the enclave of Afrin along the Turkish border from making a connection with the much larger Kurdish area east of it. Turkey sees the YPG as an extension of the PKK, the forbidden Kurdish organization, which Ankara sees as a terrorist movement.